***Warning:  my tongue seems to be stuck in my cheek this evening.

Banned Books Week (Sept. 24 – Oct. 1, 2011) is just around the corner. When I tell my students that we will be celebrating “Banned Books Week,”  I often am greeted with incredulous looks.

I know what those looks mean:  “Why would you celebrate the fact that books are banned?”  I have to quickly explain that the celebration focuses on our right to read what we choose.

Two years in a row, citizens of South Carolina have made it their mission to provide me with examples of books challenged in my own state.  How absolutely thoughtful of them.

The parent chose not to  pursue the formal challenge process, but by going to the news media, she surely convinced many South Carolina middle schoolers NOT to read the book.  After all, teens never question adults’ intelligence.

This summer, a concerned parent challenged Chris Crutcher’s Angry Management.  He was horrified that a book that contained so much profanity in its first 24 pages would be on a summer reading list.  (He took the time to count the words?)

So tonight as I consider activities and displays to celebrate our right to read, I thought I’d have a bit of fun.  Dangerous authors are running amuck in the world.  What’s a librarian to do?

Well, librarians do value copyright, so this one asked for permission to use Chris Crutcher’s photo in the “Wanted” poster.  Visit his website to view the original photo and to also download “Guide to Teaching Challenged and Banned Books featuring the novels of Chris Crutcher.”

Want to make your own “Wanted” posters?  Visit this site.

One last thing – definitely not tongue-in-cheek:  I love my home state and am proud to be a Southern girl.  The two parents who challenged books are not representative of the entire state. 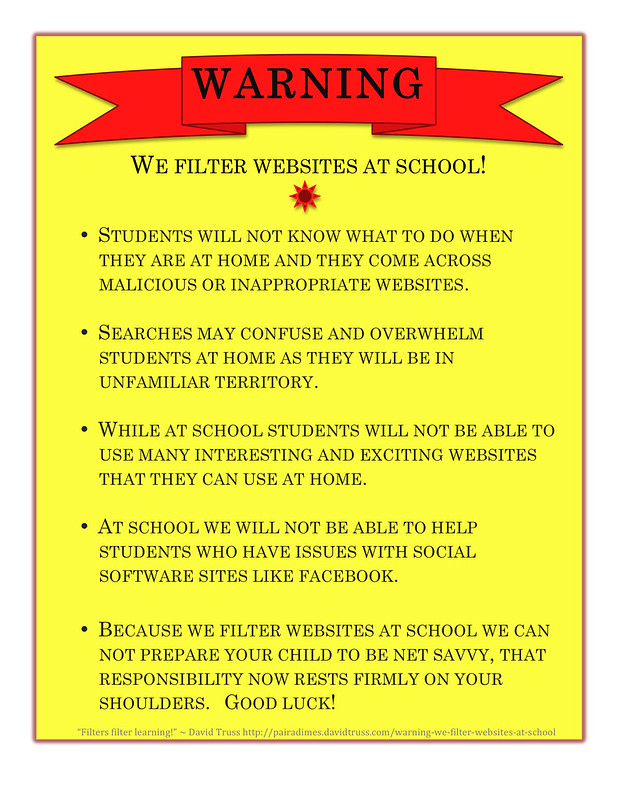 Photo by David Truss shared through a Creative Commons license

A few days ago, I shared five educational video sites to try when YouTube is blocked at school. If I had been keeping up with my Google Reader, I would have read Joyce Valenza’s Dec. 19th post in which she shares several ways of using YouTube videos in school despite its being blocked.

This is a good time to discuss the downloading of YouTube via third party applications. I agree with “Bob” about the YouTube agreement. Here is a portion of the Terms of Use: 4. General Use of Website-Permission and Restrictions C. You agree not to access User Submissions (defined below) or YouTube Content through any technology or means other than the video playback pages of the Website itself, the YouTube Embeddable Player, or other explicitly authorized means YouTube may designate. So, is the use of the sites above legal or not? I will leave that to you folks to decide.

Before I say “no” to this, I will try to contact the YouTube folks after the holiday. (No email, just phone number.) In another statement, they advise: “Our community guidelines and clear messaging on the site make it clear that users must own or have permission from copyright holders to *post* any videos. We take copyright issues very seriously. We prohibit users from *uploading* infringing material and we cooperate with copyright holders to identify and promptly remove infringing content.” (My asterisks) My question is, is it fair use if you don’t post and simply use the file temporarily in a classroom? Are we okay if we do contact the creator of the video?

My district has a new filtering program and I guess they are trying to get their money’s worth because they continue to block sites – not just daily, but hourly.  While working on READissance forms this morning, I had to find the number of pages in several books our library does not own.  Our public library didn’t have one of the titles, so I decided to rely on one of my best cataloging friends, Amazon.

I was using our generic student log in and was amazed to find that Amazon has been blocked for students.   Same with Barnes and Noble.  Yes, students are supposed to use the Internet for school work only, but don’t students sometimes have questions about books that can’t be answered by their OPAC or media specialist?

Okay, fast forward a bit in my day to 3rd block.  A class had come in to continue researching The Canterbury Tales.  When I walked by one computer, I noticed the Fortiguard (I think that is the company) warning that a user had tried to access a blocked site.  The site?  One that is the home page of every LMC computer – our library media center’s web site!

Yes, my library media web site was created in Googlepages.  It was created this past summer as an assignment for a graduate class and was the best way I had available to me at the time to create a site and post it to the Internet.  Yes, there may be some Googlepages sites that are questionable.  But this is not reason enough to me to block out any and all pages that are hosted by Google.

As an educator, my job is to prepare students to function in the real world.  The real world doesn’t filter web sites. This seems to be a bit of a problem to me.

But what do I know?  I have only taught for 31 years, am only Nationally Board Certified, have only one Master’s degree plus fifty-seven more graduate hours, and lack only three graduate courses to hold a second Master’s degree (which I am now pursuing).

While earning all those graduate hours, I also managed to raise two daughters who make me burst with pride for many reasons.  But I always tell them that I am most proud of the fine young women they have become.  And guess where they attended school?  In the same district in which I teach  – which did not have this *@#!*#! filtering program while they were students.  So, golly gee, how in the world did they manage to not grow into psychopathic, homocidal, warped maniacs?